Nicotine shots such as Nicit Up and Just Nic It can be added to nicotine-free e-liquids to give them a kick of nicotine.

Some brands produce short-fill bottles, which are designed to work perfectly with nicotine shots; Koncept XIX e-liquids, for example, come as 50ml of e-liquid in a 60ml bottle, giving you space to add a 10ml nicotine shot. 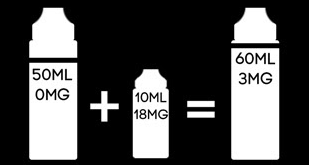 To use a nicotine shot, simply pour it into your nicotine-free e-liquid. If you aren't using a short-fill bottle of juice, you will need to make sure the bottle you are pouring the shot into has enough space to accommodate a further 10ml of liquid.

Make sure to shake your liquid well after dropping in the shot to mix in the nicotine, and that the nicotine shot you're using has a similar PG/VG ratio to your e-liquid.